WORD OF THE YEAR 2020—POLITICS AND THE US ELECTION 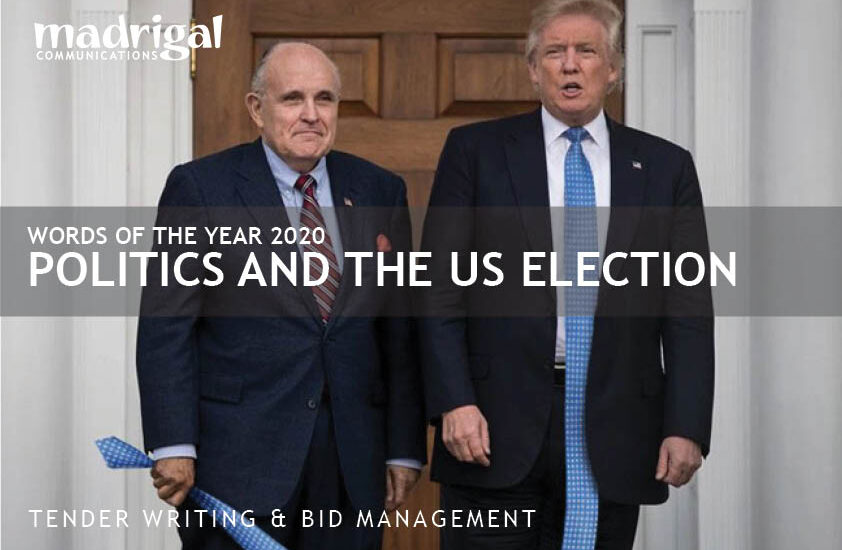 Perhaps the second most important event of 2020 was the US election played out against the back-drop of the pandemic and the Black Lives Matter movement. Here we look at words from politics and the US election for 2020  (I have borrowed a photo from the Trump Tie Meme).

The OED reported that in the early months of 2020, there were peaks in usage of IMPEACHMENT and ACQUITTAL. Use of BLACK LIVES MATTER and BLM also surged, as did the term Q-ANON. Use of BREXIT, however, dropped by 80%.

CONSPIRACY THEORY—politics and the US election

Driven by international politics and the us election, the phrase, CONSPIRACY THEORY, almost doubled in usage on the OED between October 2019 and October 2020

The driving conspiracy theory in the US is known as Q-ANON. It is an online community that believes that the coronavirus might not be real; that if it was, it had been created by government officials and other elite figures who secretly run the world; that the hysteria surrounding the pandemic was part of a plot to hurt Trump’s re-election chances.

The Germans struggled with their own conspiracy theories in 2020 driven by COVID-19. VERSCHWÖRUNGSERZÄHLUNG is a word they use. The word is formed from die Verschwörung (the conspiracy) and die Erzählung (the story, tale). The Querdenker movement, that opposes lockdowns and denies the severity of the pandemic, was a major headache for police and governments across the country.

BLACK LIVES MATTER—politics and the US election

BLACK LIVES MATTER, BLM, was in use before George Floyd was killed but his death pushed the mantra into common usage around the world as protests in the US intensified. The BLM movement became international.

The Macquarie University cites BIPOC as a new word for 2020. It is an acronym or shortening of someone who is: Black, Indigenous, or a Person of Colour.

The French had their own Black Lives Matter controversy. It highlighted its own descriptor, PASSER À TABAC, a colloquial phrase meaning to beat someone up or give them a kicking (literally it means passing the tobacconist). In November, one of the biggest controversies of the year in France occurred with police violence being exposed when a video surfaced, showing officers in Paris violently beating a black music producer.

Also in November the French lower house of parliament approved a law banning GLOTTOPHOBIE, calling it “a form of racism”. Glottophobie is defined as discrimination based on a person’s accent.

SCHADENFREUDE—politics and the US election

I was a little surprised that Merriam Webster also included one of my favourites, SCHADENFREUDE, on their list of most clicked on words for 2020. It is not a word you would have necessarily associated with 2020. However, it had two lives in the U.S. in 2020, one connected with the election and the other associated with the collegiate admissions scandal.

In 2019, a scandal arose over a criminal conspiracy to influence undergraduate admissions decisions at several top American universities. The investigation into the conspiracy was code named Operation Varsity Blues. More than 50 people were charged as part of the conspiracy ,with many pleading guilty and serving prison terms in 2020. It got some airplay in Australia due to the involvement of Lori Loughlin and Felicity Huffman, American actors.

MALARKEY—politics and the US election

Merriam Webster also includes MALARKEY as one of the words of the year. Joe Biden uses malarkey as part of his rhetoric and has been tracked doing so since 2012. It’s biggest increase in lookups in 2020 was when Biden used it during the presidential debate on 22 October, when it spiked at 32 times the level of last year.

Malarkey’s origins are not clear outside politics and the US election. It resembles an Irish last name but could also have come from Irish slang or even a similar-sounding Greek word (malaka meaning wanker). However, malarkey was first used first in the U.S. in the 1920s.

While COVID travel restrictions were reducing trade between Britain and Europe, the OED noted that it had taken the focus away from BREXIT, with the word enjoying a holiday for most of 2020.

However, to make up for it Britain had MEGXIT, the term used for the withdrawal of the Duke and Duchess of Sussex from their royal duties in the UK.

We have probably almost forgotten Australian Prime Minister, Scott Morrison’s fire response fiasco and certainly he will have wanted us to. Scott Morrison when gaining the PM’s job dubbed himself ScoMo and thus by giving himself a nickname,  considered an Australian faux pas, made himself a target.

He has been dubbed Scotty from Marketing (by the Betoota Advocate) and also the Liar from the Shire. But the disparagement went stratospheric during his clumsy visits to bushfire devastated towns in the severe bushfires of the 2019-2020 summer. Telling residents he understood their concerns while actively and deceitfully denying links with climate change  angered nearly everyone. Social media changed Scomo to SMOKO. And when he looked dismissive he became SMIRKO. When he left the country for his Hawaii holiday, and posed for a high-fiving selfie with other holiday-makers, he become SHIRKO.

The main French dictionary, Le Petit Larousse, added a few political words that we might find useful in English in 2021.

An ILLIBÉRAL is someone opposed to liberal principles such as the separation of power, independence of justice, the rule of law and individual liberty.

INFOX is a much better word than the English phrase fake news. It is a portmanteau word combining the French word for news, infos, and the word faux or false, to refer to fake news.

This post on politics and the US election is the third of our series of word of the year 2020 posts. The first looked at the words around the great pandemic. and the second looked at words about life during the pandemic.