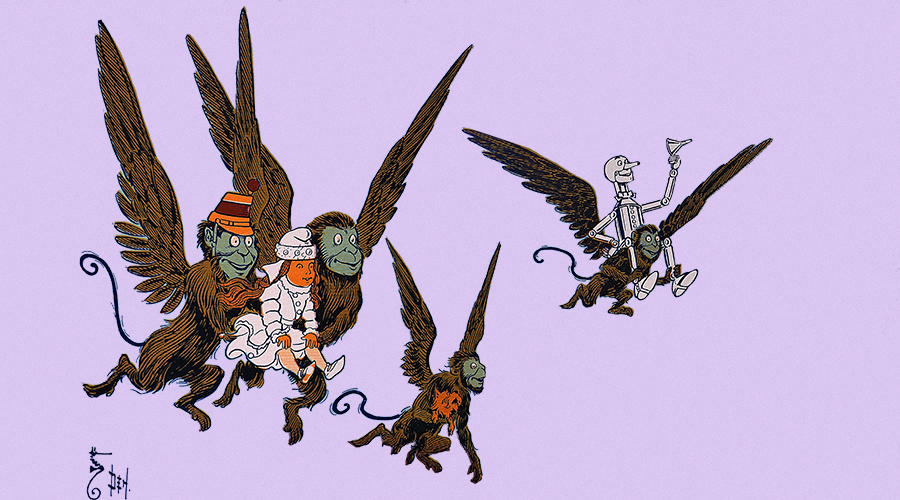 There is an area where academic analysis and the layman’s understanding of mental health issues converge. In this crossover place, there is a rich vocabulary that uses metaphors from popular culture. The words and phrases we use to describe them often have some underlining wit. This perhaps helps us to cope with what can be unpleasant and damaging behaviours. Flying monkeys is one of them.

What are flying monkeys?

Flying monkeys are people co-opted by narcissists to help them bully or persecute other people. To recruit their helpers, narcissists will lie and manipulate situations to portray the other person as the perpetrator and themselves as the victim. They often get dragged unknowingly into the narcissist’s scheming.

The narcissist may entice their flying monkeys to

Narcissists need to have at least one flying monkey. It makes them feel important and gives them allies that protect them from the truth. Narcissists often recruit from among their family, close friends, and sometimes work colleagues.

Donald Trump is widely regarded as exhibiting narcissistic personality disorder. He managed to co-opt assorted groups of right wing followers  to storm the Capitol Building. He convinced them that the US Vice-President had not overruled the vote count to legitimise his claim to the election. The rioters represented a large mob of “flying monkeys” led to a major criminal act by the bidding of their narcissistic leader, Donald Trump. These monkeys are otherwise known as the Proud Boys, the Oath Keepers, and the Three Percenters and others.

Origins in The Wizard of Oz

The children’s book The Wizard of Oz was written by Lyman Frank Baum and published in 1900. The 1939 movie with Judy Garland is based on it. In the story, the Wicked Witch of the West (the villain) has a band of flying monkeys that do her bidding.

The post image The Winged Monkeys carrying Dorothy, The Tin Man, and The Cowardly Lion, is a modified from the illustration by W.W. Denslow in “The Wonderful Wizard of Oz” (1900).

During the course of the plot, Dorothy and her companions (Toto her dog, the Tin Woodman, the Scarecrow and the Cowardly Lion) head off to find the Wicked Witch of the West. The witch sends wolves, crows, bees, and armed cronies to stop them, but to no avail. So she uses a magical Golden Cap to summon the winged monkeys.

The winged monkeys destroy the Scarecrow and the Tin Woodman, cage the Cowardly Lion, and take Dorothy and Toto to the witch.

Dorothy throws a bucket of water at the witch, who then melts away to nothing. She frees the Lion, rebuilds the Tin Woodman and repairs the Scarecrow. Eventually all is resolved. The monkeys eventually get their freedom when the Golden Cap is given to them. However, they are not allowed to make any more mischief.

Allegory with The Wizard of Oz

Along the way the leader of the winged monkeys says to Dorothy:

“… we were a free people, living happily in the great forest, flying from tree to tree, eating nuts and fruits, and doing just as we pleased without calling anybody master … This was many years ago, long before Oz came out of the clouds to rule over this land.”

Frank Baum, like many authors writing children’s stories, used it as a vehicle for shining a light on the attitudes of the time. It has been suggested that, based on the above quote, winged monkeys are an allegory for the condition of Native American Indians in the United States.

Baum’s mother-in-law was an advocate of women’s rights and it has been suggested that she influenced the world of Oz he created. Dorothy an early feminist hero and Oz was a matriarchal society (the ultimate ruler of Oz, revealed in a later book is a girl).

PS are there real flying monkeys?

Jack Pettigrew, a former academic at the University of Queensland, had a flying monkey hypothesis. He suggested that large bats species are more closely related to monkeys than to bats. It was based on the primate-like visual pathways of flying foxes.

Pettigrew did a lot of leading work on neurobiology and in other fields. However, his evolutionary theories on separate evolution of bats were not supported by mainstream zoologists particularly after DNA comparisons refuted his theories.

Beware of being a flying monkey

Being used by a narcissist, may find people in positions where they have been manipulated to do unpleasant things. It may by bullying someone else or indeed storming the Capitol Building. If it happens to you, you should ensure that you have the appropriate support to help you to escape the manipulation.