Defending your right to denial 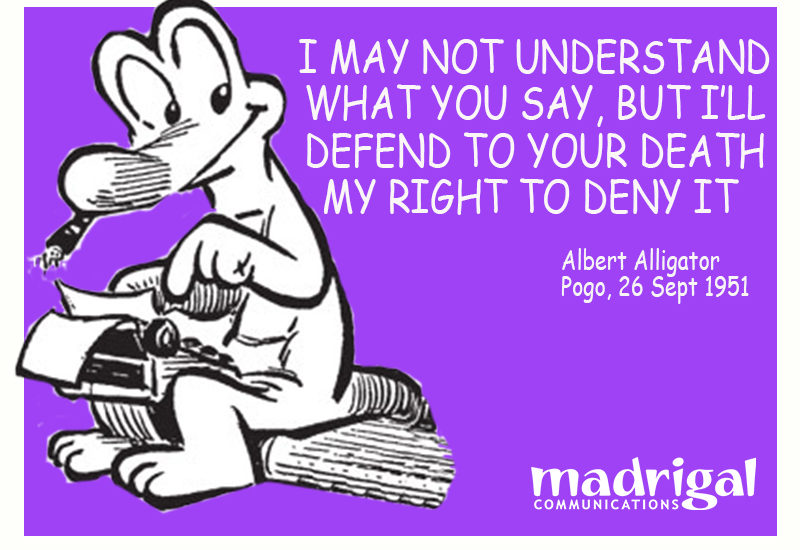 The origins of deny and denial

In the 19th century it was also used in the sense of self-denial. It was first used in 1914 to mean unconscious suppression of painful or embarrassing feelings in A.A. Brill’s translation of Freud’s Psychopathology of Everyday Life; which was the source of the expression in denial, that became popular in the 1980s.

Denial is the noun of the verb, deny, the older word by a 100-years. It was first used to declare something to be untrue. It derives from Latin denegare, to deny, reject or refuse. It literally means intensely saying no—from “de” a Latin intensifier meaning completely and “negare” meaning refuse, or to say no.

Using deny in a sentence

I may not understand what you say, but I’ll defend to your death my right to deny it.

Albert Alligator was a character created by American cartoonist Walt Kelly as part of his widely syndicated Pogo cartoon strip. The quote is from Pogo 26 September 1951.

Walter Kelly (1913-1973) was an American cartoonist, well known in the US. He started his career as a crime reporter for his local newspaper before becoming an animator at Walt Disney Studios in 1936, contributing to Pinocchio, Fantasia, and Dumbo. In 1941 he joined Dell Comics and created the comic book, Pogo, which was syndicated from 1949 until 1975 in nearly 500 papers in 14 countries.

Kelly used his syndicated cartoon to ridicule American politics. He claimed to be against “the extreme Right, the extreme Left, and the extreme Middle”. He used the strip (in May 1953) to parody McCarthyism (the intense and indiscriminate anti-communist movement).

Kelly created a character named Simple J. Malarkey, a caricature of Senator Joseph McCarthy, the anti-communist movement’s leader (there is a good summary of the satire here). When a newspaper tried to censor Kelly by saying they would drop the strip if Malarkey’s face ever appeared again, Kelly drew a bag over the character’s head making it look like a Klansmen.

Kelly was not only a political satirist he was also a keen wordsmith. He had set the Pogo story in Okefenokee Swamp (a real swamp in S.E USA) and created a vernacular called swamp-speak laced with malapropisms, broken grammar, and neologisms such as incredibobble and hysteriwockle.

In defence of free speech

So knowing that Kelly was a political satirist and wordsmith, we should fully appreciate the quote from Albert Alligator. It is a satirical form of the famous quote from Voltaire, which is always used to defend the right of free speech:

I disapprove of what you say, but I will defend to the death your right to say it.

This very often used quotation, unfortunately for us, was never indeed written by the French writer/philosopher, Voltaire (François-Marie Arouet 1694-1778) even in translation. It is really a quote of Voltaire’s biographer, Evelyn Beatrice Hall (1868 –1956) an English writer who claimed the quote was her paraphrase of Voltaire’s words in his Essay on Tolerance:

Think for yourselves and let others enjoy the privilege to do so too.

(There is a good summary of the origin of the quote here).

Walt Kelly was a perceptive man and a brave man of words willing to stand up to McCarthyism. His satirical quote on denial is relevant today to shine a humorous light on climate change denial and the misinformation that surrounds it.