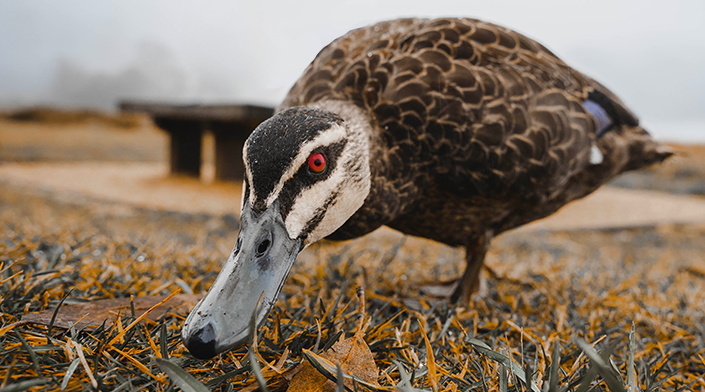 The irrational fear of animals (for instance, spiders, insects, mice, cats, or snakes) can be a severe phobia according to psychiatrists. Phobia comes from the Greek word for fear, ‘phóbos’.

Another phobia is ornithophobia, the fear of birds. It is not common but certainly after watching Alfred Hitchcock’s film, The Birds, it increases.

Writing about phobias can be dangerous. We risk entering the world of the “fauxbia”, a paradise of made up words describing every minor phobia conceivable. Some examples include:

While the anxieties may be real (or not) the names are really just strings of pseudo Greek or Latin based words ending in “phobia”. For instance if I need a word for fear of social media I could glue electro-logo-phobia together to create the fear of electronic words.

But today I discovered the most delightful fauxbia. Anatidaephobia originated from the Far Side comic by Gary Larson. He defined it as “the fear that somewhere, somehow, a duck is watching you”. It was the caption to his illustration of a nervous man, alone in his office, being watched by a duck in a building across the street.

The term anatidaephobia uses as its start, “Anatidae”, the biological family name of birds that includes ducks.

Anatidaephobia, of course, is not real or officially recognised (despite what quite a few websites suggest). Be careful when you use it. Even if it were real, it is not the irrational fear of a duck that makes a sufferer anxious but a peculiar type of paranoia that makes someone believe they are being spied on by a duck.

Now while I sympathise with anyone who suffers from anxiety, any psychiatrist that diagnoses poultry paranoia has got to be a quack.